Massage for PTSD and depression 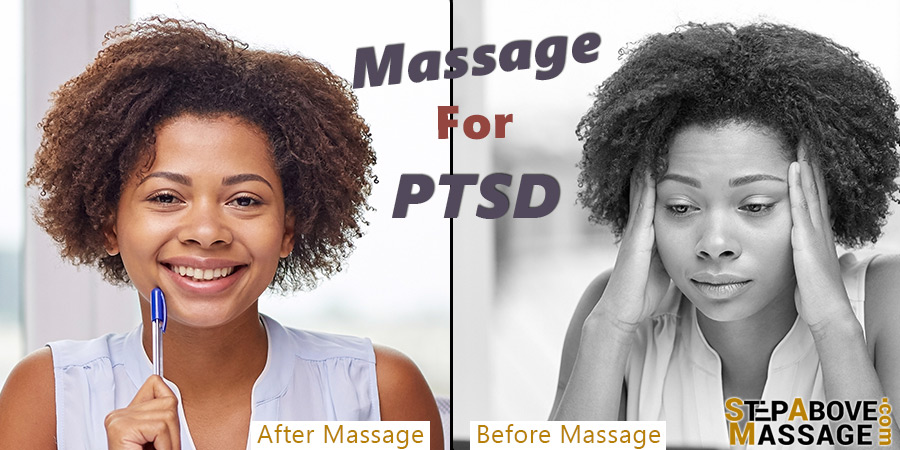 Depression and Post-traumatic stress disorder (PTSD) are one of the diseases of our century, and thousands of people around the world are struggling with this problem including many patients in Raleigh, North Carolina. It is usually emphasized to see a psychiatrist and use effective drugs in the treatment of this problem, But the best way to treat the depression and Post-traumatic stress disorder (PTSD) symptoms is said to be the deep tissue massage. Join us as we explore deep tissue massage benefits and other necessary information about this method of treatment. We explain how deep tissue massage for PTSD can help you with your better health.

Why treat depression with the massage

People become depressed when their secretion of happy hormones decreases, and their stress hormones are released more. It is interesting to know that massage can calm the body and remove anxiety and tension from your mind. Massage can also lower the level of stress hormone secretion known as cortisol and raise the level of morale by increasing the secretion of two hormones that are effective in happiness and relaxation, namely serotonin and dopamine.

Why is massage therapy vital for depression and PTSD clients

Massage therapy is vital for people suffering from Post-traumatic stress disorder (PTSD) because depression has been proven to lower the symptoms of depression and PTSD. Massage for PTSD is critical and helpful. A major way it does is the physical touch that we receive in massage through the physical connection. Massage therapy leads to an emotional response that is a reduction in the hormone that leads to stress. The more cortisol we have throughout our body, the more stress and anxiety that we feel. Massage has this ability to reduce this hormone by up to 50%, and at the same time, it boosts other hormones such as serotine and dopamine. These are powerful mood-stabilizing hormones that affect your overall mood movement and impulse control—the more of these feel-good hormones we have floating throughout our body.

What is post-traumatic stress disorder (PTSD)

Post-Traumatic Stress Disorder (PTSD) is a syndrome or set of symptoms that affect some people affected by natural disasters such as floods, earthquakes, landslides, fires, storms, and tsunamis.), War, violence (theft, murder, sexual abuse, coercion, etc.), illness and loss of loved ones. Under stressful and dangerous conditions, natural reactions occur in our body, including sweating, increased heart rate, decreased digestive activity, and so on. These reactions are influenced by hormones and our nervous system. It is also normal to have intense fear and helplessness and pressure in these situations. But most people will return to normal after the stressful and dangerous situation is over and will not face any problems. But in some people, fear, helplessness, and other symptoms persist even after the accident is over and even months or years later. These people have PTSD and need to be treated.

What are the signs and symptoms of PTSD clients

As mentioned, there are many reasons for this mental disorder in patients, including natural disasters and illness and the loss of people. Fortunately, Raleigh, North Carolina is one of the most beautiful and calming places in the world. It is nicest place to live for these patients.The symptoms of this disorder are numerous and can appear from about three months to several years after the accident. In most cases, the duration of the disease is about six months, but in some people, there will be chronic symptoms for years after the accident.

Why is massage therapy effective for depression and PTSD

According to the results of an analysis, massage therapy is effective, but its effects have not yet been studied in detail. Research conducted during this analysis shows that a massage therapy session can be effective in lowering blood pressure, heart rate, and state anxiety (in response to a specific situation). Several sessions of massage therapy can reduce trait anxiety (general anxiety), depression, and pain.
According to a 2005 study published in the International Journal of Neuroscience, researchers found that having three massage therapy sessions a week for women with breast cancer resulted in less stress and feelings of discomfort, resulting in less anger. Another study in the American Journal of Child and Adult Psychiatry found that patients suffering from depression and anxiety were happier after massage sessions and had less discomfort and stress.

People use massage therapy to improve a variety of health-related problems. The benefits of this treatment include the following:

How can deep tissue massage therapy help patients with PTSD

A deep tissue massage is a good option for those who suffer from this type of disorder. Mood relief, reducing anxiety, reducing depression, and improving personal mood are the positive results of massage therapy for clients with depression and post-traumatic stress disorder. According to studies conducted in this field, massage clients have experienced less pain, physical stress, irritability, anxiety/worry, and depression than before.

For massage therapy of such people, two important points must be remembered! Build trust and a sense of security in people! Given that sufferers of this disorder suffer from a lack of self-confidence, the massage therapists should strive to build the patient’s confidence and safety. By creating these feelings in the client, they will feel better during the massage.
Step Above Massage offers low cost and high quality deep tissue massage in Raleigh, North Carolina! Here you will be provided with our professional massage experts!

What is hand and stone franchise
October 6, 2020

What do you know about watsu massage
October 6, 2020
What is marma points therapy
October 5, 2020

What is scalp massage and what its benefits
October 4, 2020